By Any Means Necessary: Q&A with Chip Allen

Chip Allen’s letting loose. He’s squeegeed, splattered, and gesturally brushed over his geometric abstractions, and by the looks of it action painting’s winning out. His loose, intuitive marks and smudges run interference across seemingly systematic lines, the resulting balance a taut non-resolution that tugs from opposing ends, even if one end does so a bit harder. But there’s no subjugation here. Amalgamation is more like it, and a methodical contemplation on the all-encompassing potential of his medium — oil in his most recent paintings. Brooklyn-based Chip Allen (NAP #75, 2007 MFA Annual) is exhibiting in a group show at Heiner Contemporary in Washington D.C. I took the opportunity to catch up with the artist and ask him a few questions. His answers and more images of his work after the jump. 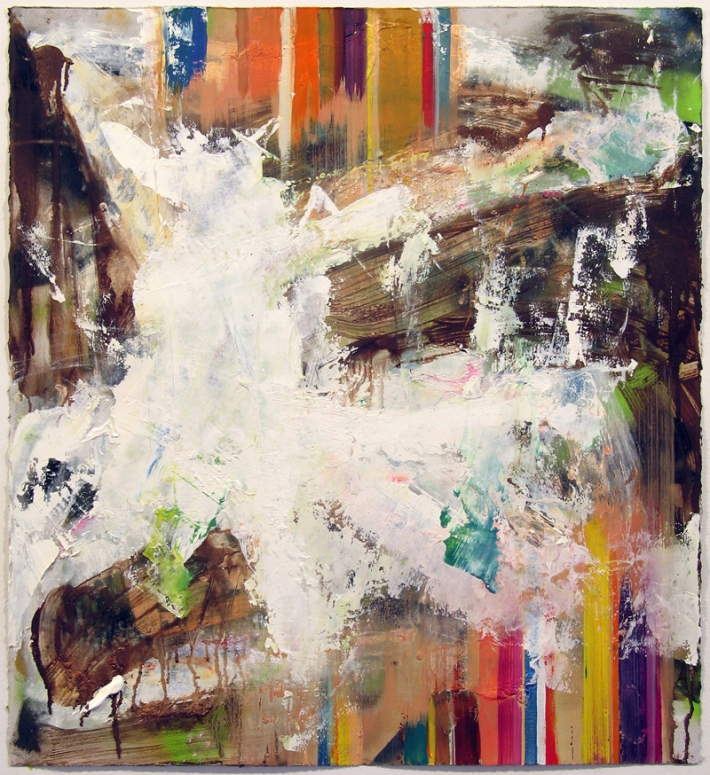 Chip Allen: The year before, I had been painting in Providence, RI and in New Hampshire prior to that. I became interested in working around other artists, and having some time to simply paint and not really concentrate on anything else but painting. I had a large studio and I was surrounded by some good people who were busy making their work. It was a great experience. Baltimore had a quirky energy to it, which I enjoyed.

MS: Many of your paintings, particularly this series, deal with repetition and following rules in your mark-making and color choices. Your series Love and Living Creatures seems to hint at these rules (they are all a single uniform size for example), but the rules become subverted or masked by your gestural marks. Is this tension between structured rule and casual mark-making important in your work?

CA: Yes, that’s true. It seems to pop up in different ways. In earlier paintings I was repeating myself by layering shapes, brushstrokes, drawings, and transfers on top of each other until it reached a point where I felt it was finished.

Some of the rules, or guides that you mention came about in a series of geometric abstractions I painted while at Rutgers. They were an attempt to make a painting with a clear beginning and a definite finishing point, breaking the layering and repetition in other works. They were worked out in a sketch, then executed. I set up a simple hierarchy of rectangular forms to create the compositions, then chose colors from various objects and pictures. The amount of color I used depended on the amount of color within that particular object or picture. Later, I used colors inspired by readings, thoughts, memories, and colors I wanted to see.

It was a great exercise, and I find it kind of funny (and ironic) in retrospect how many I did. I essentially duplicated the process over and over, and in the end, repeated myself again. I eventually stopped making them and let go of that structured approach. I wanted to get back to making a painting with my hands off the wheel, using my instincts and allowing it to develop on its own. 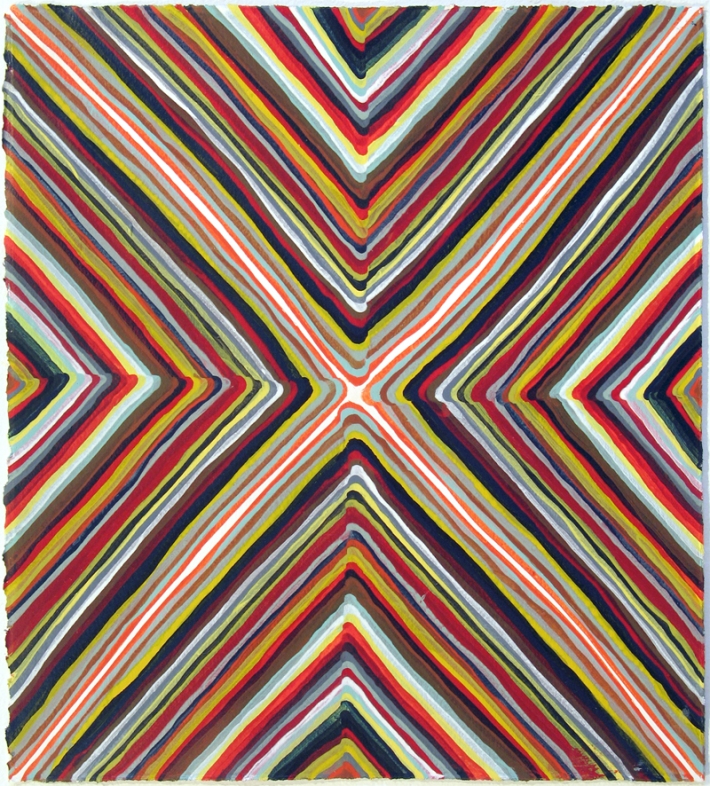 The small paintings you mentioned at Heiner Contemporary are similar to those geometric paintings in that the colors are sourced from elsewhere, but the method for painting the colors on the surface is different. Once each color is mixed in their own container, I arrange the containers in a row with my eyes closed and then paint each line one at a time. I then repeat the process by shuffling the containers around again, with my eyes closed, until I reach the middle of the painting surface. I like the result and I’m looking forward to making more and seeing where they go. 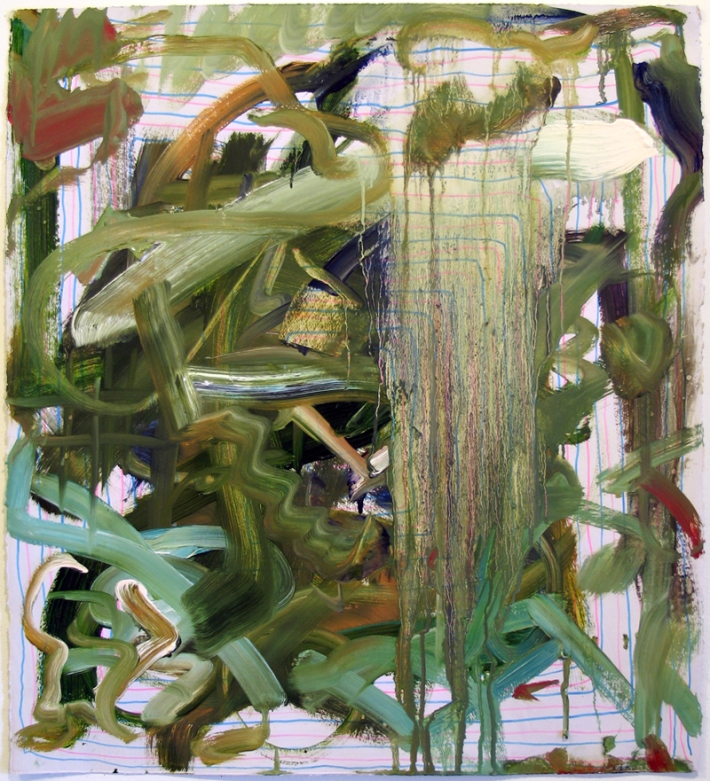 You pointed out the only rule with the Love and Living Creature series. Although, I’m not sure I would call it a rule, probably just a consistent size. The first three are actually two or three inches taller than the others. That’s because I thought they were a little two vertical and wanted them to be closer to a square. That size just felt right with those. These paintings are still quite fresh, and ongoing in my studio at the moment. I kind of have my head down, and I’m working through them. I’m not even really sure why I called them Love and Living Creatures. It felt romantic and mysterious to me. Maybe I’ll have an ah-ha moment down the road.

I do believe that structured and spontaneous approaches are important to my work. In the end, I’m just trying to make a painting and I’ll use whatever means necessary to get there. Sometimes I need to reign things in, and sometimes let them go. There’s a balance I suppose I’m aware of on some level, and playing with that is what it’s really all about.

MS: Tell me about your work with the Sol Lewitt Foundation. What do you do there and does the work affect your paintings?

CA: I work as a draftsman and execute Sol Lewitt’s wall drawings at various museums, galleries and homes. I can’t say that the work directly affects my paintings on a conscious level, but I’m sure the experience, like other experiences in my life, circulate within my practice in some way. I recently spent five weeks installing one of his drawings in Madrid where I was able see heaps of painting, including Goya’s black paintings, Velázquez’s Las Meninas, along with a great deal of Spanish architecture and I know that had an effect on me, so that experience, via Sol Lewitt, might reveal itself at some point. 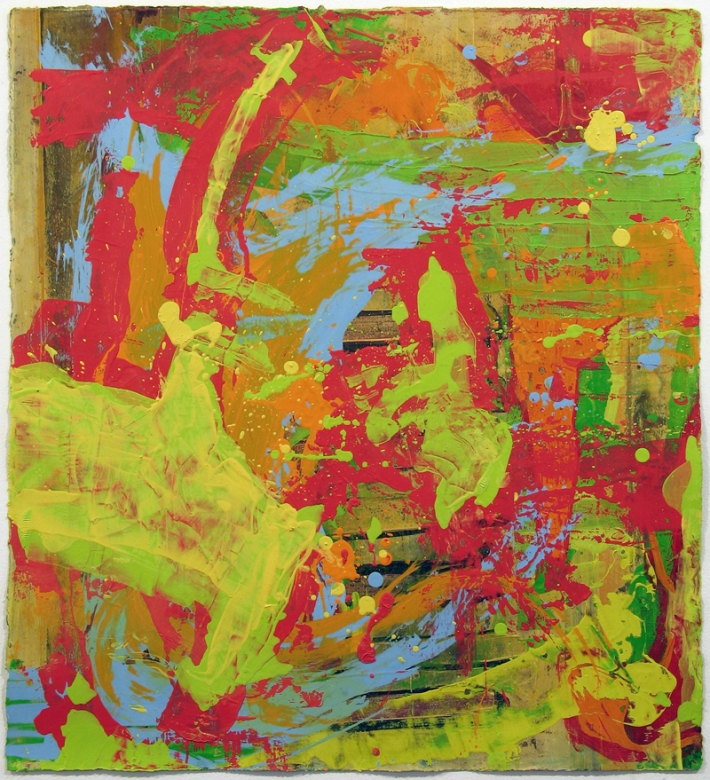 MS: Sounds like a nice way to make a living. With regard to your paintings, why are you working with paper right now?

CA: I’m currently working with paper because it’s light and easy to handle. I was working on canvas for quite some time and it feels good let go of the preparation that comes with it. I have thoughts of increasing the size of Love and Living Creature series into larger scale, so I’ll probably need a sturdier support and canvas might be the way to go. 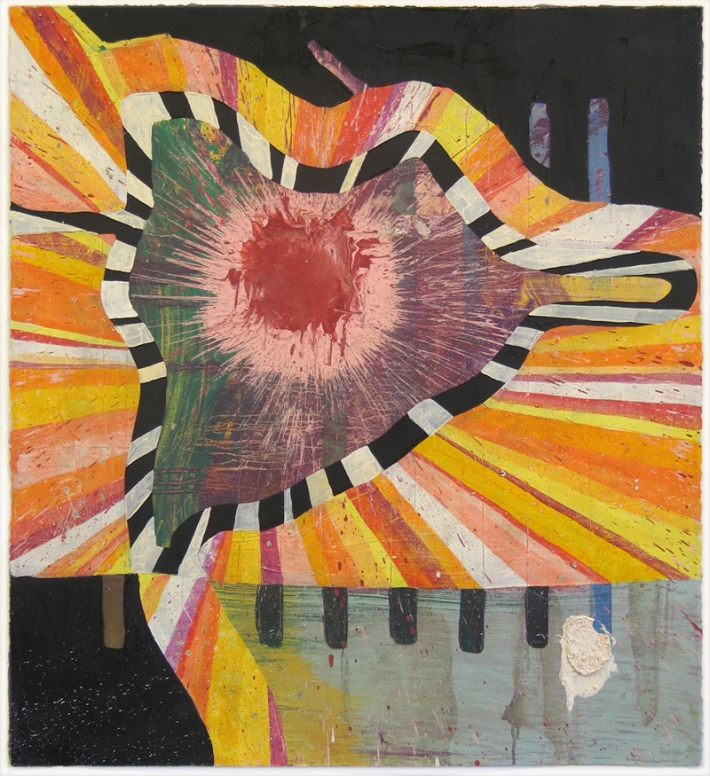