From Print to Painting to Print: CTRL+P at Arlington Arts Center

Brian Chippendale came to prominence as a leading figure in the underground art and music scene that blossomed in Providence, RI during the 1990s. At the center of this creative explosion was Fort Thunder, an expansive live-work space co-founded by Chippendale in 1995 that occupied the second floor of an historic mill. Part performance space, part printshop, part residence, Fort Thunder was ultimately purchased by a developer and demolished in 2002, giving way to a supermarket and office supply store. As Chippendale bounced around studios over the next couple of years he went from decorating his walls with prints of his drawings to stretching them over wooden bars like paintings. As he told Greg Cook in a profile for Juxtapoz last June: “I think I got so wound up by the Fort Thunder thing that I couldn’t start fastening them to the walls. It seemed like a good way to make things I could move around. Plus, the walls were concrete, and I couldn’t really staple to them.” 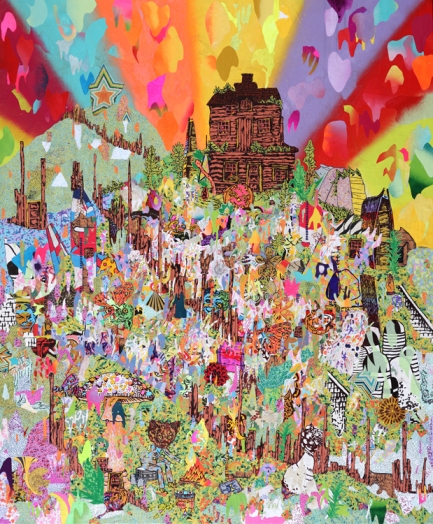 A few of these wall pieces, along with works by 27 other artists, are currently on display in CTRL+P (on view through September 16), an expansive group show co-curated by Kristina Bilonick and Julie Chae at Arlington Arts Center. The show explores new and multidisciplinary directions in printmaking, including painterly treatments like Brian Chippendale’s “stretched paper” pieces and a myriad other approaches.For this blog post I look at a few of the more painterly works and I consider how they arrived at this junction between painting and printmaking.

If you’re looking for the birds and wolves and psychedelic narratives that populated Jungil Hong’s otherworldly landscapes you may have to look elsewhere. Of the three pieces by Hong included in CTRL+P just one, 49 Days in the Next Dimension, contains any figurative elements and even then it’s the abstracted patterns that dominate. The other two pieces, Grill with Polka Dots and Stripes with Polka Dots (pictured below), are pure abstraction.

Like Chippendale — who is her longtime partner — Hong produces screenprints on paper that she then mounts onto wooden panels. In the case of Grill with Polka Dots and Stripes with Polka Dots she also uses exposed screens as stencils for spray-painted, allover patterns. According to co-curator Julie Chae, it’s a process that’s loosened up Hong’s practice, perhaps because introducing spray paint nudges the visual structure of printmaking just so. Indeed, there’s a softening effect produced by the spray mist as it settles on the surface of Hong’s work, and a painterly affect that results from this newly found element of chance.

It may not be immediately evident that Farewell (pictured below), a collaboration between NY-based painter Vince Contarino and printmaking studio Kayrock, is a six-color screenprint. Certainly, the brushy layers of painterly blotches intertwined with flat fields of color speak to the sequential application of paint on canvas. But a closer look at Farewell hints at some of the textural characteristics of printmaking, measured and deliberate, delicately yielding to the artist’s gestural marks. It’s this subtle collaborative hum that becomes part of the experience of navigating this piece.

To begin with, Farewell is not a reproduction of an existing painting by Contarino. It’s a digital composition by the artist produced specifically for this project, based on a high resolution scan of the artist’s brush strokes and various other layers of digital pictorial elements. Each color in the composition is pulled from the digital file and mixed in the studio, then registered and applied individually. That the final result of this modular process speaks so directly to Contario’s paintings speaks not only to the artist’s deft stylistic hand but also to the skill of an experienced printmaker, seemingly at his best when he leaves behind but the faintest trace of his work. 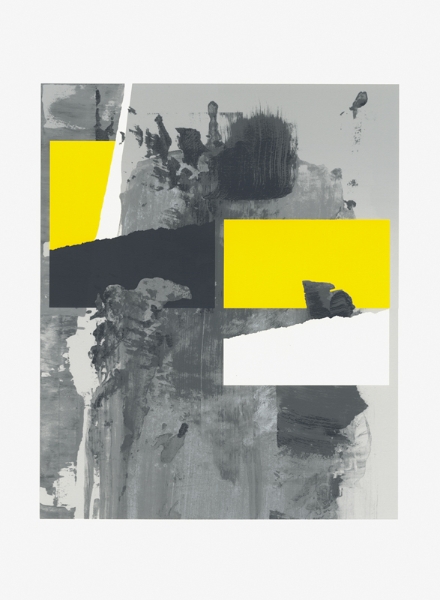 Now reverse this process, conceptually at least, and you’ll begin to get a feel for Kris Chatterson’s artistic toolset. His paintings, one of which you’ll find in CTRL+P, are partially composed of digital collages — old marks that Kris photographs and manipulates digitally, slicing and dicing them and then aggregating them again before transferring them onto his canvases. As a process, Kris’ approach was originally borne out of an independent book project from 2009 (pictured below), and over the years he’s accumulated a large digital library of these marks that serve as a catalyst for his compositions.

But the connection between the books and his current paintings is less of a direct path than a circuitous one — there’s much time and multiple processes between projects. The high contrast digital treatment of the brushy marks was originally Kris’ attempt at visually negotiating the mediating effects of the scanner and printer during the bookmaking process. The technique stuck, although he’s now mining a richer set of marks from a series of monotypes he completed while on a printmaking residency in 2006. He’s also introduced other visual elements — like the printed digital static in Untitled below — conceptually borne from the mediating effect of technology in his painting practice.

Book project by Kris Chatterson (image courtesy of the artist)

Installation view of CTRL+P. All works untitlted, by Kris Chatterson.

Annie Albagli’s We Are OK II (pictured below) is layers built upon layers. She arrives at semi abstracted compositions via repetition, resulting in a kind of semiotic language that remains tethered to the physical world in its stylized references to nature and its diurnal cycles. Although her practice is clearly printmaking, there’s a painterly texture that’s revealed in the layering process, opaque and then transparent and back-and-forth.

Albagli’s approach is also painterly in that her work comes together in process. There’s some preliminary planning, but the final output is a spontaneous experiment of color and composition within the prescribed formal parameters of her stencils. Her prints are therefore uneditioned, unique semi abstracted representations that function not unlike a painting. 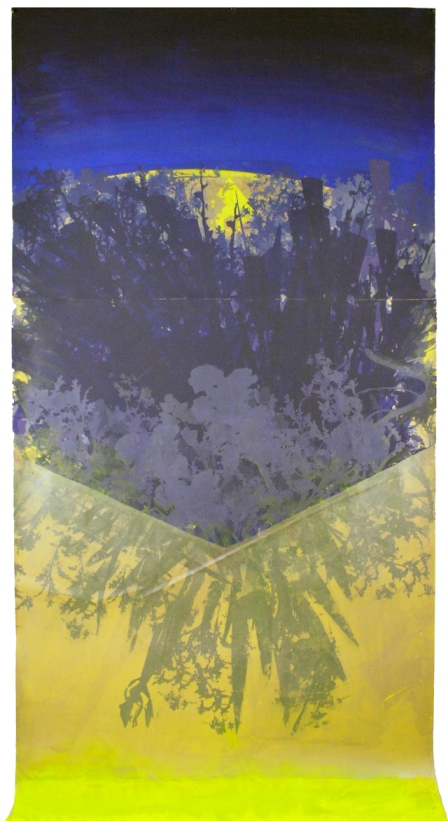