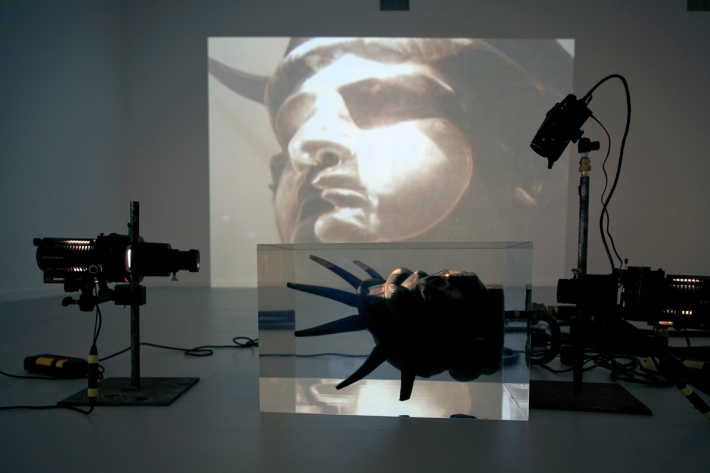 It can be a bothersome pairing, art and politics. Politics strives for deliverables and metrics; art may provide neither. If we are to consider the contemporary art world and not, say, the art of the Occupy move­ment, then the relationship may seem even more contrived. An art show in a commercial gallery decry­ing the ills of capitalism, for example, can smack of self-con­tradiction pretty quickly, especially if its work carries a price tag that only a banker could afford.

These ambiguities can seem inescapable even when an artist’s bona fides are unquestionable. Such is the case with the Hirshhorn’s ongoing retrospec­tive of noted Chinese dissident and art-world megastar Ai Weiwei, whose celebrity as an activist often sometimes overshadows his art objects. As Peter Schjeldahl of the New Yorker rightly asked, “Is Ai Weiwei a political artist or an artful politician?” If we pose the same question about “Crude,” Andrei Molodkin’s show at the American University Museum, the answer might come easier. The Russian artist swings his politics around like a blunt object.

“Crude” comprises a se­ries of transparent acrylic molds attached to plastic hoses that stretch across the museum floor. Texas oil, the crude kind, is pumped through the hoses and into the molds as multiple air compressors thump loudly in the background. When the installation is up and running, acrylic blocks spell the word “democracy” with their gooey, black con­tents. Elsewhere, molds of the disembodied head and torch-bearing arm of the Stat­ue of Liberty are made to look like frozen lab specimens. A camera streams a grainy close-up of the statue’s face onto a wall projection like the lost footage of an investigative autopsy, the oil oozing and bubbling. It’s a statement on geopolitics that is about as subtle as an NRA rally. 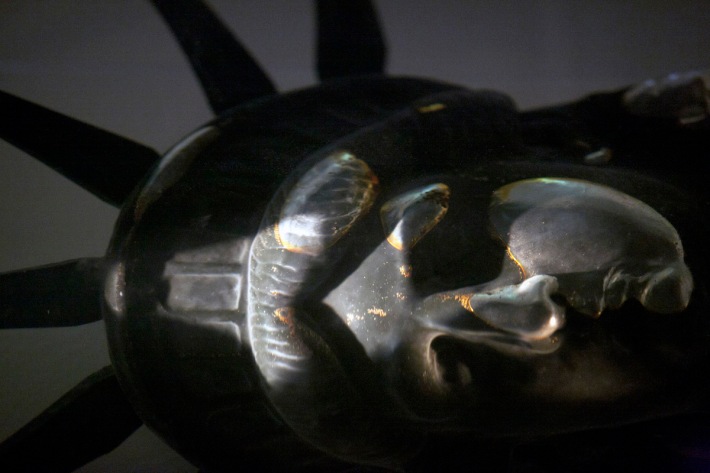 Certainly, the show’s immersive, dystopi­an narrative does kick around some signifi­cant issues: the destabilizing influence of large special interests like Big Oil, for one, and America’s misguided efforts at nation-building in Iraq—but Molodkin’s one-liners sound as absolutist as any jingoistic political slogan. Bush’s “axis of evil” comes to mind: Molodkin appears to craft his own version with equally oversimpli­fied evildoers.

Take the artist’s large drawing of an Obama campaign poster. It’s plastered with the familiar motto “Yes We Can” and placed behind another of Molodkin’s molds arranged to spell out “Fuck You.” Step back, and the work reads “Yes We Can Fuck You.” Molodkin may lack nuance, but he makes up for it with rhetorical flair. That’s a gift in politics.

This article was originally published in the Washington City Paper. 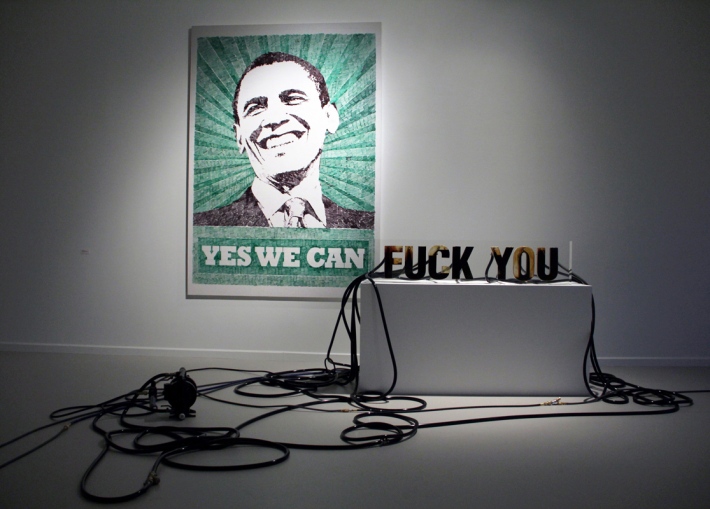