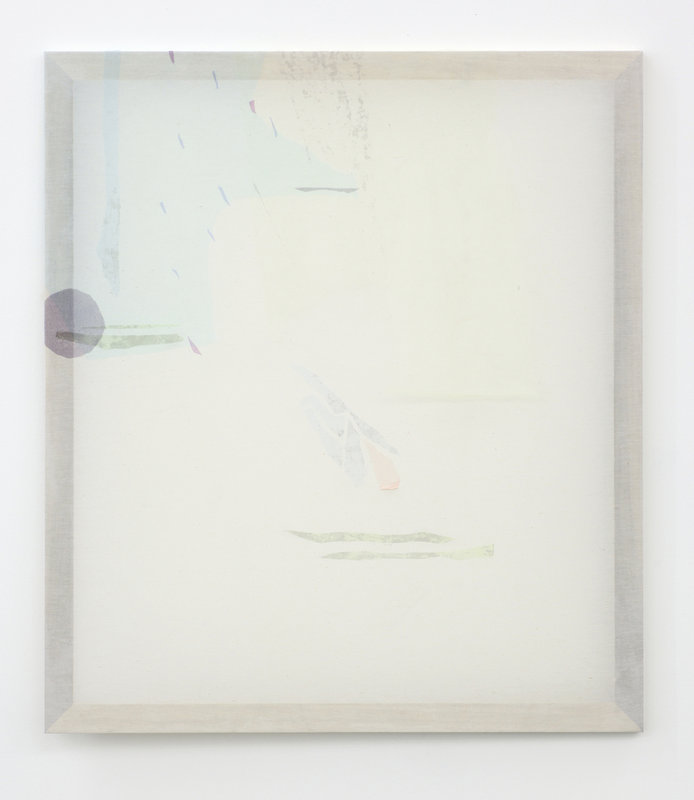 To say that JPEG images don’t do justice to Mitzi Pederson’s work at Ratio 3 (3:43, open until tomorrow) is a bit of an understatement. Her exploration of materials finds her once again working with tulle, a fine netting that is lightweight and translucent and seemingly fragile from up close — good luck capturing that with your DSLR. Sculpturally, Pederson continues to work with simple arrangements of cinder blocks on the floor that are formally reminiscent of Carl Andre. On the walls her assemblages are clear references to painting — squint your eyes enough and Pederson’s color palette might remind you of Monet’s Rouen Cathedral, step back and you’re sure to find a connection to Rebecca Morris’ whimsical abstractions. I recently had the chance to email Mitzi a few questions about her show, her materials, and her interest in painting. 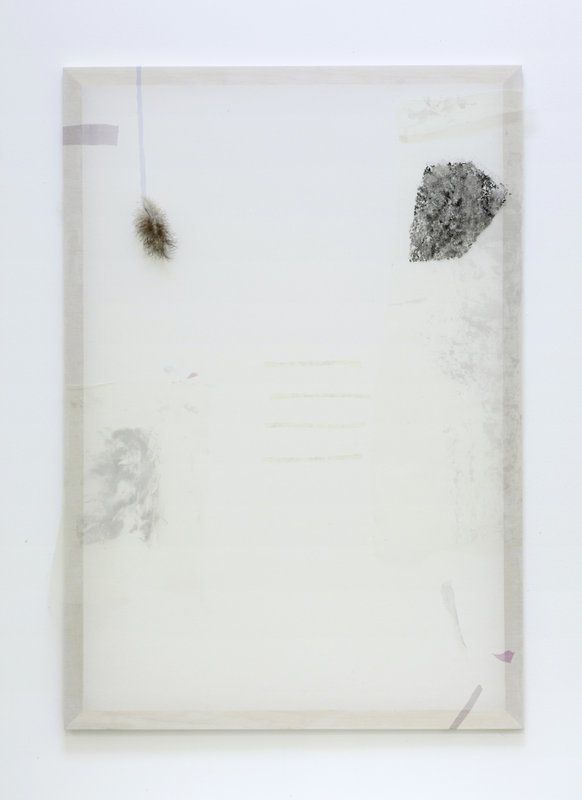 Matt Smith Chavez: You’re a sculptor, yet some of the work you have in 3:43 and in previous shows makes a direct reference to painting. Can you tell me about this interest and about how your practice as a sculptor shapes your perspective on painting?

Mitzi Pederson: I have always wanted to make paintings! But it’s really difficult for me because I am never sure what to paint… Over time, it seemed easier to work in 3-dimensions and communicate that way. However, I still always have hopes to make paintings. At the moment, I have found something that satisfies this need and provides a potential way to fulfill this hope. It isn’t exactly painting, but it allows me to define it for myself. I am looking forward to continuing this work, but am very open and curious about which direction this might go – further into painting or back in sculptural work, or some other combination… 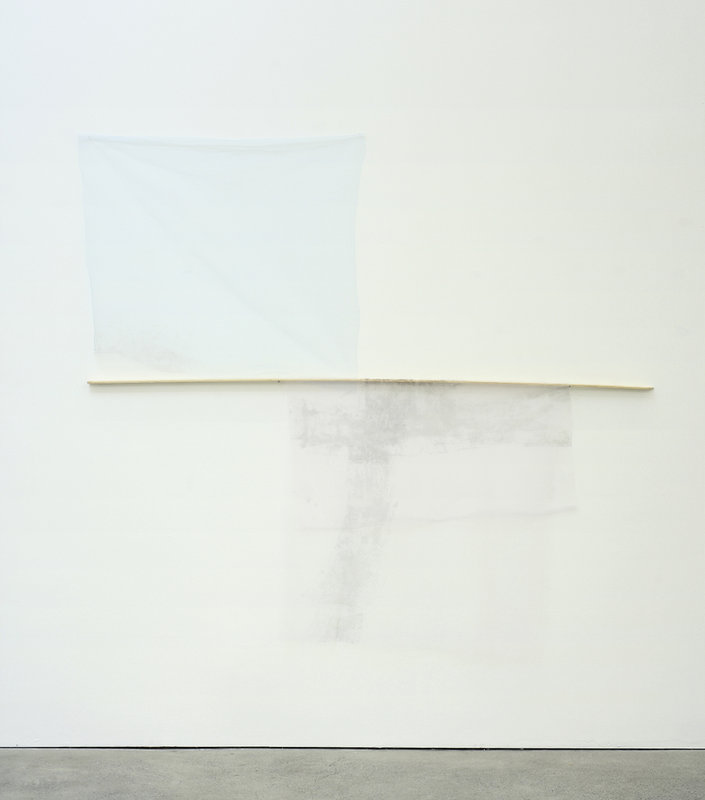 MSC: With regard to your materials, it’s easy to draw parallels between your use of cellophane in previous work and your use of tulle in your current show. In both cases it’s as if you’re working with something that is as close to a non-material as you can get. It’s almost like working with light. Or air. Is this something that you’re thinking about, or does your interest in these translucent materials come from some place else?

MP: It’s a bit difficult to answer this question in some ways because a good amount of time has passed since I used cellophane (or acetate) and my work has changed as some investigations have evolved, changed, disappeared or emerged. I suppose the interest is coming from different places, despite some existing similarities.

For certain, the visual transparency of the cellophane and the tulle is important to me as a material quality. Yet both materials allow me to explore and work with the strengths and weaknesses of the materials – both unexpected and obvious, which is a tendency of mine.

Cellophane is a transparent type of plastic that has resilience but tears easily. With many of the cellophane pieces I wanted to test the strength, resilience and breaking point of the cellophane and wood. Cellophane has an enduring ability to hold and resist, which was interesting and surprising in contrast to its visual qualities. I definitely used the transparency as a sort of material absence to create a slight visual confusion. I liked that it appeared to both continue and interrupt the “line” of wood, that it was a floating color, and that it also extended this color via shadow or reflection to other surfaces. 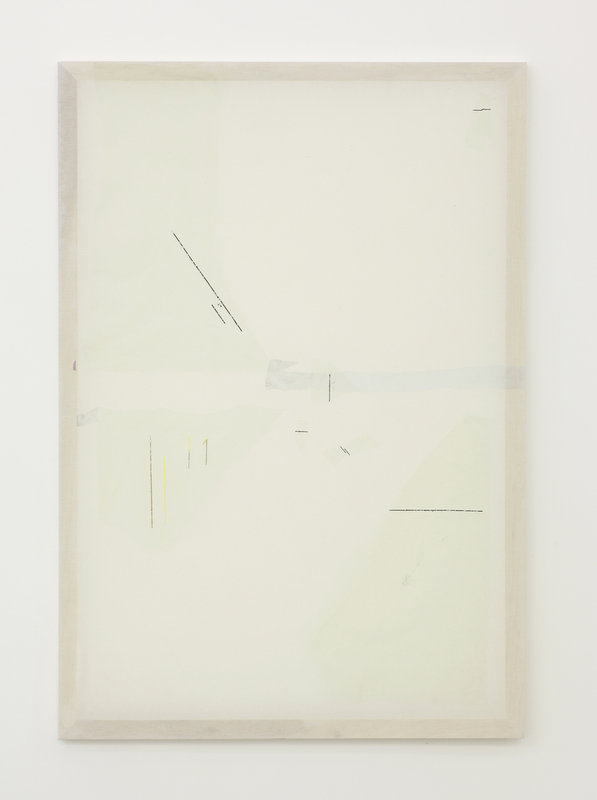 The tulle has a similar function but is quite different as well, partially because I am interested in other things at the moment and partially because of its own qualities as a material. Over the past few years I have tried to figure out the best ways to use this material. During this time I decided to make works that appear to be floating, invisible, or weightless. I’ve also been trying to make some paintings or wall works. Tulle is a great material to use for these reasons. My interests and the material fed each other along, really. But I discovered that the “strength” of the tulle is its absence –or lightness in weight, texture, color, and substance, yet it can hold what appears to have weight – such as color (paint and glitter) and some objects such as wood, etc. It also has such great subtle shadow depth and can play with your perception particularly in terms of where it is in space. It has been really exciting to see how I can work with it in that way. As it tends to be rather difficult to direct, however, I’ve become more inclined over time to use it as/with a surface and explore it that way, which is mainly what has resulted in this recent show.

MSC: Despite any potential similarities between the materials, you seem to be using them differently. You’ve used cellophane sculpturally, without alluding to the two-dimensional picture plane. And you’ve used tulle in works that directly reference painting. Are the properties of your materials what lead you from sculptural objects to wall-mounted, stretched canvases?

MP: I’ve partly answered this in the last bit, but I can add some additional thoughts. The materials do lead me in directions, but it also coincides with where my interests lie. I have been predominantly making 3-dimensional pieces for some time now, but many of them I consider to be something like 3-dimensional drawings or spatial drawings, so in certain ways I am not always looking at these works entirely as “sculptures”. Also, I have observed that part of my process involves an initial stage of making 2-dimensional works. I tend to make smaller “paintings” or “drawings” on paper during which I come to a deeper understanding of where my interests lie at that given time. However, at some point, I feel the need to move on from these flat pieces into 3-dimensions in order to expand on my ideas and realize them in a fuller sense.

Right now, with the tulle, I am definitely working out what is painting to me and exploring the possibilities, even though they aren’t technically paintings per se. Part of me wonders if this is an enlarged version of an initial stage of my process as well. 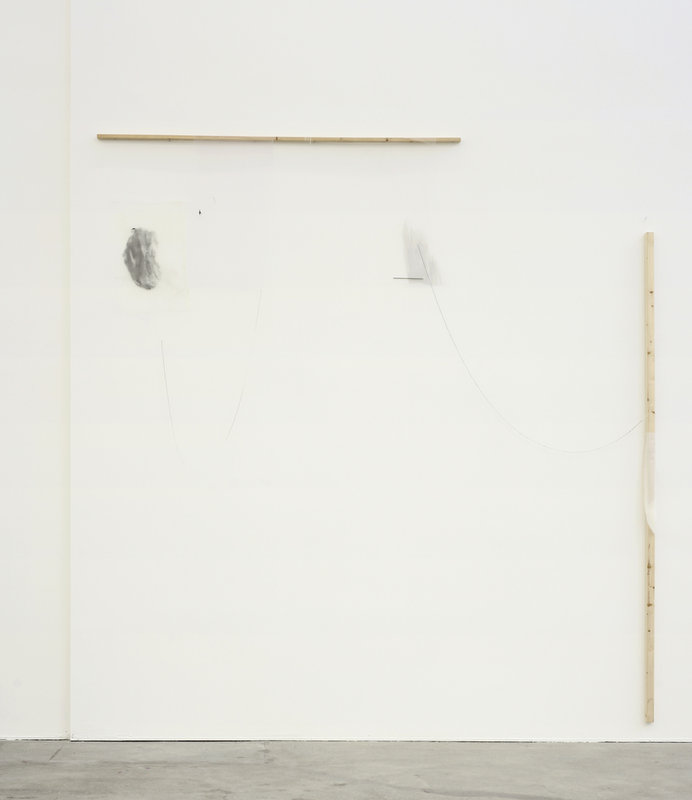 MSC: Some of the materials you use in your current show at Ratio 3 seem to sit heavy on the floor, like your concrete slabs. Other materials float with us at eye level, like the textiles you’re using. And when your textiles are on the floor they’re kind of tethered to heftier materials that act almost like anchors. Can you tell me more about your interest in this tension between heavy and light?

MP: I think my main interest in heavy and light results from my interest in perception. In my repeated investigation of material I tend to work with what seem to be the strength and weakness (or the major and minor aspects) of a material, how that is perceived, and how one aspect (usually the less expected) can be brought to focus. I like to see how strong each quality is or try to show the light aspect of heavy and the heavy aspect of light. I think that the tension between light and heavy has to do with this. They both feed the other, but the relationship between the two hopefully brings attention to something previously unnoticed or provides some space to question perception and one’s relationship to that. 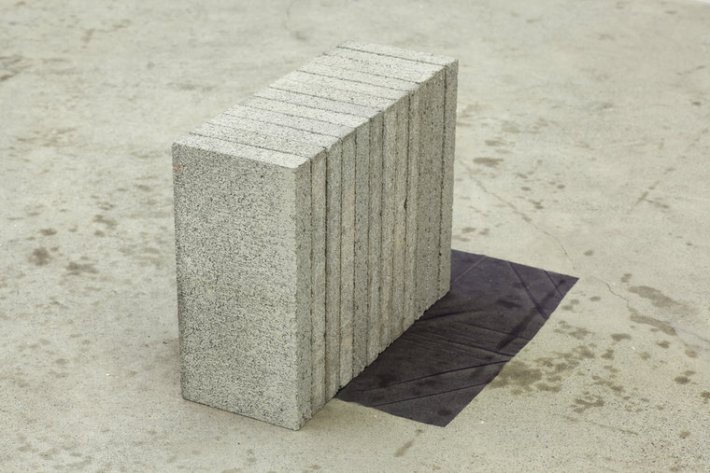 ___
Mitzi Pederson lives and works in San Francisco. Born in 1976 in Stuart, Florida, Pederson earned a BFA from Carnegie Mellon University in 1999. In 2004, Pederson completed an MFA in Painting and Drawing at the California College of the Arts. A selection of her solo exhibitions includes Schleicher/Lange, Paris (2012); World Class Boxing, Miami (2009); the Hammer Museum, Los Angeles (2008); and White Columns, New York (2006). Pederson has participated in numerous group exhibitions, including the American Academy in Rome (2013); the Scottsdale Museum of Contemporary Art (2011); MACRO FUTURE, Rome (2009); Milton Keynes Gallery and Harris Museum, Preston, UK (2009); ACME, Los Angeles (2009); and the 2008 Biennial at the Whitney Museum of American Art, New York. Her work is in the collections of the Museum of Contemporary Art, Chicago; the Henry Art Gallery, Seattle; the San Francisco Museum of Modern Art; the Berkeley Museum of Art and Pacific Film Archive; and the UCLA Hammer Museum, Los Angeles.